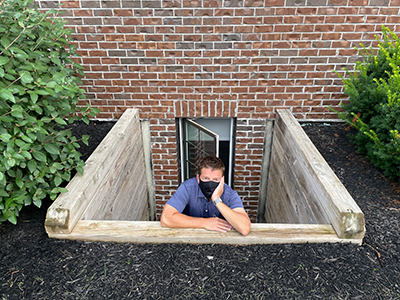 A few sentences of background: I received the Johnson & Johnson single-dose vaccination on April 2, 2021. I tested positive with the Covid-19 Delta variant, one of those rare “breakthrough” cases, on July 30. Following the standard science, I self-isolated in a basement bedroom for ten days. I was not asymptomatic.

Let’s face it; the first few days are misery. If you’re not vaccinated, this period will possibly extend for a long time, and you’re likely to miss the other stages completely. For example, a guy I know (we’ll call him “Tommy”) tested positive a few days before me. He wasn’t vaccinated. As I write this, he’s hoping to be released from the hospital today.

In this stage, you don’t do much that doesn’t involve some unpleasant bodily function — snorting, snuffling, wheezing, coughing, huffing, puffing, pushing, pulling. Even sleeping sucks, and I love sleeping.

If you’re lucky, by the third day or so, you’re feeling pretty good. You’re getting by without medication, and the shivering has waned to the point where your teeth aren’t clattering inside your head 24/7. This is when you first begin to notice you’re in ‘isolation.’

If you live alone, the transition may not be that noticeable. But if you’re used to living with someone (like five other people and two dogs), the juxtaposition is extreme. Mainly because they’re now avoiding you like the plague (of course!) and your meals are delivered on the home equivalent of a prison cart. At my house, this involved my wife bringing a tray to the basement, hollering out, “Food!” and running back upstairs before I could emerge, zombie-like, from my  room.

All of this is according to recommended protocol, you tell yourself repeatedly, but it sure feels like everyone might be enjoying themselves a bit too much upstairs.

Is that salsa music I hear?

I’ve come to terms with the walls. I happen to know that the room is precisely 11.5 ft by 12 ft and that the ceiling is definitely too low to jump on the bed, even if it’s made of foam. (The bed, not the ceiling.) The dogs came to visit today, but they both looked at the wildness in my eyes and didn’t stick around.

I’m feeling better. Really. No meds for the last few days; I’ve showered regularly and have been doing little workouts on a patch of carpet that I barely fit on. I’m on the mend and my spirits are good!

Who am I kidding? I’m miserable.

Happy to feel better, happy to have someone taking care of me, happy to have this room and this bed and this desk and something to do, but I’m pretty sick of being around myself.

Now I know how the family feels.

I’m 100% healthy, but Anthony Fauci apparently hates me, as he’s sentenced me to at least five more days in solitary confinement. Nevertheless, I’ve come to terms with the routine: get up, exercise in a small open space, shower, work at the desk, work standing at the dresser, work sitting on my daughter’s beanbag, take calls while pacing the room. Char still won’t let me walk through the house, so I’ll occasionally climb out the window just to see something other than these four walls (see Stage 2.) All of this feels like the Covid-normal we experienced last year, except it all happens in one room.

Still, I’m getting things done. The body and the mind are amazingly resilient and tactile, and we have an exceptional ability to adapt to our circumstances. I’m reading a lot. I’m thinking of people like Anne Frank, John McCain, and Stephen Hawking. I’m contemplating the wrongfully imprisoned, Holocaust victims, and countless others who had their freedoms taken away, often forever. I consider all the heroes of history who did some of their best work in conditions more trying than my own, but honestly, this beanbag is exceedingly uncomfortable.

I marvel, and then I get back to work.

Don’t be sad because it’s over, they say, be grateful that it happened. This is purportedly about love, of course, but it could easily apply to any viral-based illness. Though breakthrough cases like mine appear to be on the rise, they’re still pretty rare, and now that I’ve been vaccinated AND had this nasty Delta variant, I feel like I have a new lease on life.  I should be über–inoculated against this thing now, which should provide – what? – at least another couple of months of not having to worry about it happening again until Lambda or the following variant rolls around. Feeling lucky, I make a note to pick up a lottery ticket. (Insert public plea for everyone to get vaccinated and help bring this to an end.)

Once I was feeling better and yet still confined to quarters, I was able to focus without distraction on all kinds of things that had been evading my attention. I burned through lingering to-do lists with abandon. And with the rest of the talented Flock keeping things moving at Rare Bird, it was a welcome change from the usual bustle. It appears forced isolation – while unpleasant and disruptive – does have its gifts.

Not saying that I’d like to do it again any time soon, but if life hands you four walls, there may be no better opportunity than to use them to expand your horizons.

P.S. The new neighbors moved in a couple of weeks ago. They watched me climb out the basement window for fresh air or to go for a walk or to simply stand there in the yard and the sunshine. One day, late in my isolation, I walked by while they were sitting on their front porch. I casually waved, cut across the yard, ducked into the window well, and disappeared.

I wonder if they’ll ever ask why.

After being sick for nearly two weeks, he was admitted to the hospital with Covid pneumonia and enlarged kidneys and spleen. They put him on a variety of therapeutics and he was released five days later.

He’s home resting now and feeling better. Protocol suggests that it will be two weeks before he can return to work. In total, he will have been down for nearly a month.

Due to the proximity of both of us testing positive (even though we’re several states apart), It’s hard not to compare our two experiences and draw some anecdotal conclusions. Primarily this: the vaccines are performing as intended, serving to lessen the impact of the disease and allow for a quicker recovery.

I hope anyone out there who might still be on the fence about getting vaccinated will reconsider. It would be a shame to lose anyone else unnecessarily.

Next:
What Ted Lasso Taught Us >